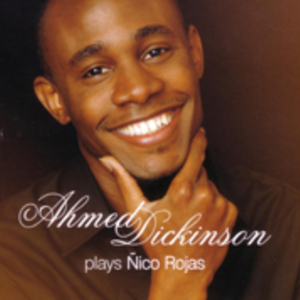 Style: Classical guitar Cubafilin records: Havana Master 2008 Format: CD Working closely with Nico, Ahmed began transcribing his entire works. They used the few existing recordings available and were helped by Nico's son Jesus, who had learned to play some of his father's music when he was younger. Nico's music, of the Filin era, combines traditional Cuban rhythms and styles with harmonies and melodies influenced by 20th century North American style jazz. He composed most of it during the late 40s and throughout the 50s.

This is a welcome excursion into the repertoire of the great Cuban composer Ñico Rojas, whose pieces combine traditional Cuban rhythms and styles with jazz harmonies and melodies, known as filin’ (from the English word ‘feeling’) and composed during the late ‘40s and ‘50s.

The Cuban filin’ movement (comparable to early Brazilian Bossa Nova and whose best known singer is Omara Portuondo) is beautifully brought to life in this high quality solo guitar recital.  Dickinson has worked closely with Ñico, who is now in his 80s, transcribing and performing his entire work.  Despite being well known and respected amongst top Cuban musicians, much of his work remained unpublished until Dickinson began his labour of love after meeting Ñico at the International Guitar Festival in Havana in 2000.

Dickinson is a superb guitarist with a lightness of touch, whose playing shows real swing as well as emotional depth. Many of the pieces here are homages to Ñico’s great friendships with other musicians, (such as Bebo Valdés, father of Chucho of Irakere fame) and Ahmed Dickinson has given us his own homage to Ñico in this exquisite portrait of a fascinating era in Cuban music.