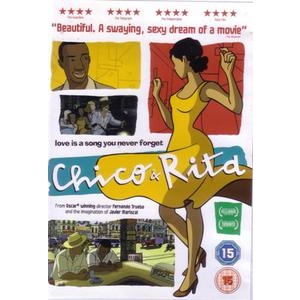 2011. Dir Fernando Trueba and Javier Mariscal. spain. Spanish animated feature-length film (made for adults not children) with Spanish and English languages. The story of Chico and Rita, Havana musician and singer, is set against backdrops of Havana, New York City, Las Vegas, Hollywood and Paris in the late 1940s and early 1950s.

A gifted songwriter and beautiful singer chase their dreams—and each other—from Havana to New York and Las Vegas. Chico is a young piano player with big dreams. Rita is a beautiful singer with an extraordinary voice. Music and romantic desire unite them, but their journey—in the tradition of the Latin ballad, the bolero—brings heartache and torment.

The film was produced by Fernando Trueba Producciones, Estudio Mariscal, and Magic Light Pictures. It won the Goya Award for Best Animated Film at the 25th Goya Awards and was nominated for the Oscar for Best Animated Feature at the 84th Academy Awards (the first nomination for a Spanish full-length animated film).

Sorry, this item is temporarily out of stock. Please check back soon.