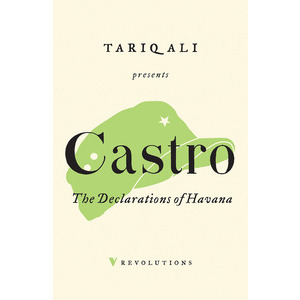 Fidel Castro:The Declarations of Havana + History Will Absolve Me Intro by Tariq Ali

Iconic speeches by Fidel Castro in response to the US administration's attempt to isolate Cuba, introduced by Tariq Ali.

History Will Absolve Me - Fidel Castro's speech at his own trial 16 October 1953 in Cuba following his arrest with others after the failed attack on the Moncada barracks which was in turn in response to the military coup by Fulgencio Batista in March 1952 and brutal dictatorship. It became the first manifesto of the 26 July movement in Cuba. It is an iconic speech for its comprehensive analysis of the state of the nation under US imperialism.

Intro by renowned radical writer and activist Tariq Ali provides a searing analysis of the relevance of Castro’s message for today.