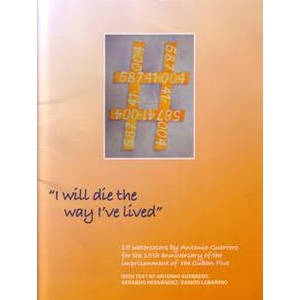 Espanol: Yo me muero como vivi

Book which reproduces the set of 15 watercolour paintings by Antonio Guerrero based on his time in solitary confinement for the 15th anniversary of the imprisonment of Guerrero and the rest of the Cuban Five. With explanatory text by Antonio, Gerardo and Ramón.

“All of these images have something in common. They are memories of the unjust and cruel treatment we were given from the first day of our arrest, moments of our survival over 17 months, isolated in punishment cells called ‘the hole’ in the Miami Federal Detention Center. Arriving at number 15, I decided to end the work with this quantity, coinciding with the number of years in captivity we will reach September 12, 2013.
There, those of us who didn’t know them, learned the lyrics to Silvio Rodriguez’s emblematic song "El necio" and, everyday, with no communication from anyone, facing cruelty and brutal punishment, from inside, directed outward, we firmly asserted: "I will die as I have lived."
Antonio Guerrero Rodríguez, April 2013, Marianna Federal Prison, Florida

The History of Havana ...
View all items in books