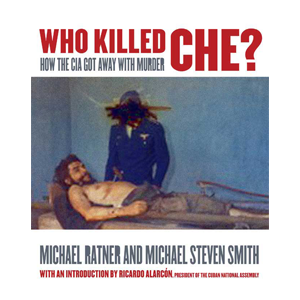 Author Michael Ratner & Michael Steven Smith
Fascinating new evidence joins the dots between the role of the Bolivian armed forces and the CIA in the events which lead to Che's murder. Direct CIA involvement places one of their agents at the scene of his murder consulting with the highest authorities in the administration throughout.

Introduced by Ricardo Alarcón, President of the Cuban National Assembly, Michael Ratner and Michael Steven Smith have put together fascinating new evidence which joins the dots between the role of the Bolivian armed forces and the CIA in the events which lead to Che’s murder on 9th October 1967, nearly 24 hours after his capture.

The CIA began a file in July 1956, identifying “Che” as a key political figure and charted his movements from Cuba via the Congo to Bolivia. Despite their antipathy Che’s personality and political qualities come through even these CIA files

CIA intimate involvement in Bolivian politics, particularly from the moment that the armed forces learnt of the guerrilla activity in the country, is revealed.  President Barrientos, received support in the form of “advisors” who, following discussions with the CIA and the White House, were put in charge of tracking down the guerrillas from March 1967. Interestingly the documents reveal that the CIA assessment of the state of politics in Bolivia was similar to that of Che - not ripe for revolution perhaps but certainly profoundly vulnerable.

The account of Che’s capture is well documented but this book contains evidence of the direct CIA involvement and places one of their agents at the scene of his murder consulting with the highest authorities in the administration throughout. This is the “smoking gun” that puts them on the spot.

It is clear from the CIA’s estimation of the impact of Che’s death on politics in Latin America that they regarded the defeat of the guerrillas in Bolivia as essential. Regimes throughout the continent feared the spread of the ideas of the Cuban Revolution. This book tells the story of the extent the US was prepared to go to make sure that Che Guevara would not succeed.  As we know of course the story is far from over.  A very engaging read.